Sit Down with MAD

MAD – Mixed Abled Dance Co-productions recently received the Outstanding Artist Award 2020 (tanz.at reported). This begged the question, who is behind this role model for disability arts that changes the perspective of art and of disability? I met with the artistic directors Elisabeth Löffler and Vera Rosner, as well as the performer Frans Poelstra on Zoom.

MAD was founded by wheelchair dancers to support performers with disabilities to hone their artistic work. Co-founders Elisabeth Löffler, Vera Rosner, Cornelia Scheuer and – behind the scene – Guido Reimitz began the preparatory work in 2013. The team met primarily at Elisabeth Löffler’s home, who at the time had a young daughter to care for. Elisabeth Löffler stated, “I really appreciated that everyone got involved and that we were able to do the meetings at my home at the time. Otherwise, I would not have been able to participate”.

However, it would not have been the same without the distinguished performer and key figure in the Austrian performance scene. Over the years, Elisabeth has consistently pushed aside prejudices, for example, when Elfriede Ott parried her wish to become an actress by saying „You could make a radio broadcast, at least you can’t be seen there.“

Despite these debilitating comments Elisabeth found strength from others who helped her succeed on her own path. Daniel Aschwanden, a pioneer in local inclusive performance work was one key supporter. Aschwanden cast Elisabeth not only in his plays, but also accompanied her to workshops at home and abroad, leaving Elisabeth with the confidence to not only continue dancing but learn skills and methods on how to teach other dancers who are wheelchair handy.

One method particularly suitable for working with dancers in a wheelchair is contact improvisation. This is why contact improvisation dancers like Steve Paxton, Emery Blackwell, Jonathan Burrows and Andrew Harwood are role models for Vera Rosner and Elisabeth Löffler. At first, Harwood was not at all enthusiastic about Elisabeth’s participation in his workshops. Each time Elisabeth was forced to negotiate terms so that she could stay. “It was only after three workshops that he fully accepted that I would take part,” reported Elisabeth.

Meanwhile, the young woman pursuing her acting ambitions had become a self-confident and self-determined performer. For many years, Elisabeth performed in works by Josi Wananu (tanz.at reported, among other things on The Audition). She later teamed up with Wananu and Frans Poelstra who worked behind the scenes on Elisabeth’s latest solo, “FixMeIfUCan.” In succession to her latest work, the gorgeous sit-down comedy „FixMeIfUCan“ is Löffler’s own artistic branding. In the true sense of the word, she not only performs, but wrote the script herself.

Vera Rosner also discovered the desire to dance after her experience of contact improvisation. Vera stated, “It was a new discovery for me to be able to express myself with my body, whereas before I always articulated everything with my head.” She studied with Alito Alessi and in 2011 she played the lead role in the founding DanceAbility Europe and the Austrian production, „Dependance“ (www.danceability.at). As a performer she danced in Jerome Bel’s “Gala” and in pieces by Doris Uhlich, such as “Every Body Electric”, which had an exclusive cast of dancers with disabilities, and “Habitat”. Now Vera regularly teaches open classes and an advanced training group, whose members also appear in improvisational performances like, “Jattle, BAM + Poetry” (see review on tanz.at). She currently also leads DanceAbility workshops at home and abroad, including at ImPulsTanz in Austria.

On the initiative of Vera Rosner, in 2011, 2012, and 2014 they danced on Invalidenstrasse (“Disability Street” in English) and in 2016 a gallery presentation was carried out. “Unfortunately, we haven’t been able to rename it – yet” Vera stated. The Vienna initiative was put on hold due to other commitments. However, upon meeting like-minded people throughout her time with MAD, DanceAbility, and her tour with Doris Uhlich, which took her as far as Brazil, Vera commented, “We have started to establish contacts with other cities that also have ‘disability’ streets or places in order to organize simultaneous dance interventions.“

Art and / or activism?

Elisabeth Löffler and Vera Rosner do not see themselves as political activists. „The first step is not political,“ says Elisabeth, who has been politically committed to various initiatives such as the peace movement and the self-determined life movement at BIZEPS. On stage she wants to be perceived as an artist, because „We have no political mandate, we don’t do political shows, but we are political people.“ However, Vera adds that it is automatically a socio-political act “when you go on stage with a body like mine”.

In the 20th century dance emancipated itself by questioning, if not overcoming, the stigma of the perfect body. Today the dance experience is open to everyone. However, communication of this new view has not yet reached everyone in the general public. Throughout their stage experience, Elisabeth and Vera have had to endure a lot of disrespectful, derogatory, even disgusting reactions although the two women powered through and were not discouraged by this instead, they grew from the adversity the challenges presented.

The recognition of what is termed, disability arts, in the international performance scene as well as in academia is slowly gaining importance in Austria. The term disability arts takes the once original negative perspective of a disability and transforms what society sees as a disability by giving it aesthetic meaning and value. As Elisabeth states: “The body is more likely to be ‘seen’ as handicapped rather than being handicapped.”

Disability Arts is not a well-meaning occupation or therapy but an art form. Just like the artists in Gugging have developed their own signature in the fine arts, performers such as Elisabeth Löffler, Vera Rosner, Michael Turinsky or Cornelia Scheuer continue to develop dance as an art form that no longer belongs exclusively to the „beautiful“ bodies, but depicts today’s society and allows for different bodies and expressions side by side. And with this work they are pioneers in Austria.

Austria has some catching up to do

In the Erasmus + project DOOL, the members of MAD experienced how different the treatment of people with a disability is in Europe. The partnership brought together organizations from Italy and Finland, countries in which people with a disability are legally equated to the majority of society, with initiatives from Austria, Slovenia and Hungary, which are comparatively lagging behind in terms of inclusion.

Therefore, working in schools is a core task of MAD. MellowYellow was the first project of its kind to be launched in schools around Vienna. The MellowYellow project lasted over a year and ended with live performances. Since then, single-day and multi-day workshops have been offered, each workshop is led by a team from MAD. Around 180 school projects have taken place since 2016, in which 30 artists with and without disabilities have participated. At a MellowYellow workshop, respect is the key word. The workshop starts with a surprise element for the children. Typically, this surprise element is a dancer on the team arrives in a wheelchair, baring that the dancer is comfortable executing the workshops programming. Vera reiterated, “Of course we cannot know whether they will inform the children in advance.” Meaning it’s up to the schools to not tell the children that the dancer will be a wheelchair handy dancer to achieve the full effect of the workshop.

MellowYellow claims this method works: The fears of contact are quickly overcome in this situation and soon you can witness the alienation giving way to the interest in the children and their joy of dancing with their workshop leaders. It seems obvious that these encounters shift perspectives, break down prejudices, and change attitudes, both among children and teachers. Elisabeth, Vera and Frans have a lot of stories in store for this and also get corresponding feedback. However, beyond the anecdotal evidence, there is now also academic data. In an impact assessment by the Institute for Participatory Social Research, 88 percent of the teachers stated that they had already recommended MellowYellow to other teachers. In this context, Frans Poelstra, who now concentrates his teaching activities exclusively on this project, stated: „We urgently need young talent, given the success that this work brings.“ Thus, another objective of MAD, is to enable people with a disability to receive dance training. A start was made with the admission of Adil Embaby, a dancer without legs, to the training for dance pedagogy at the Music and Art University in Vienna.

All in all, MAD was really taking off when, “everything was halted in 2020,” says Vera Rosner. The demand for the workshops in the context of MellowYellow grew steadily and the Erasmus + EU project DOOL was in the middle of implementation, tours, e.g. with Doris Uhlich’s choreographies were on the agenda. The pandemic put an end to all this vibrant activity. For Vera and Elisabeth, the virtual room offers no alternative. “In our work, touch is very important, even with the children. You can’t translate that over the internet,” says Vera. Elisabeth even defends herself, “I finally made contact, and now I should give that up and do something online? No!“

Nevertheless, they are also present on the Internet:

Vera Rosner will be a discussion partner of Claudia Neumeyer in the conversation “Inklusiver Tanz, Kunst oder Therapie” von tamed am 10. April. https://www.tamed.eu/diskussionsabende

The solo „FixMeIfUCan“ by Elisabeth Löffler can be seen on www.elisabethloeffler.com 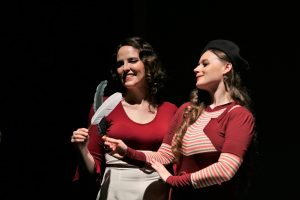